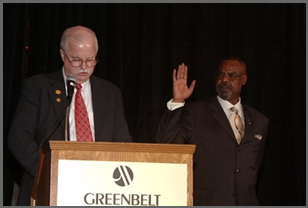 Over 200 Members, legislators, family members and guests attended the Annual Installation Banquet of the Prince George's County Association of REALTORS® held at the Greenbelt Marriott on Wednesday, September 21st. David Maclin of Realty Executives Main Street USA was installed as President. Mr. Maclin has been licensed for 14 years and has served on many Committees of the Prince George's County, Maryland and National Association of REALTORS®. He has been a member of the Board of Directors since 2002. The following Members were also installed and will serve on the 2006 Board of Directors:

The following Directors were elected to serve two year terms:

These Officers and Directors along with Alease Bowles, Art Greene and Bea Rodgers will make up the 2006 Board.

See photos from the 2005-2006 Installation of Officers and Directors.