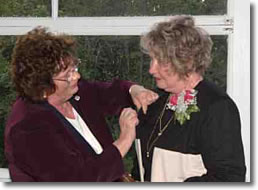 Connie Stommel was installed as President of the Prince George's County Association of REALTORS® on October 22nd at the Mt. Airy Mansion. Connie has been licensed for 23 years and is associated with RE/MAX 100 in Camp Springs.

Connie has tirelessly served the Prince George's County Association for many years in many capacities. She has served as a Director, Vice President and President-Elect as well as Chairman of the Awards Committee. Connie is a graduate of the MAR Leadership Academy and is a member of the DSC Hall of Fame.

Also installed to serve on the Board of Directors were:


They will serve along with the other members of the Board:


At the Annual Installation, special awards were presented to the following: